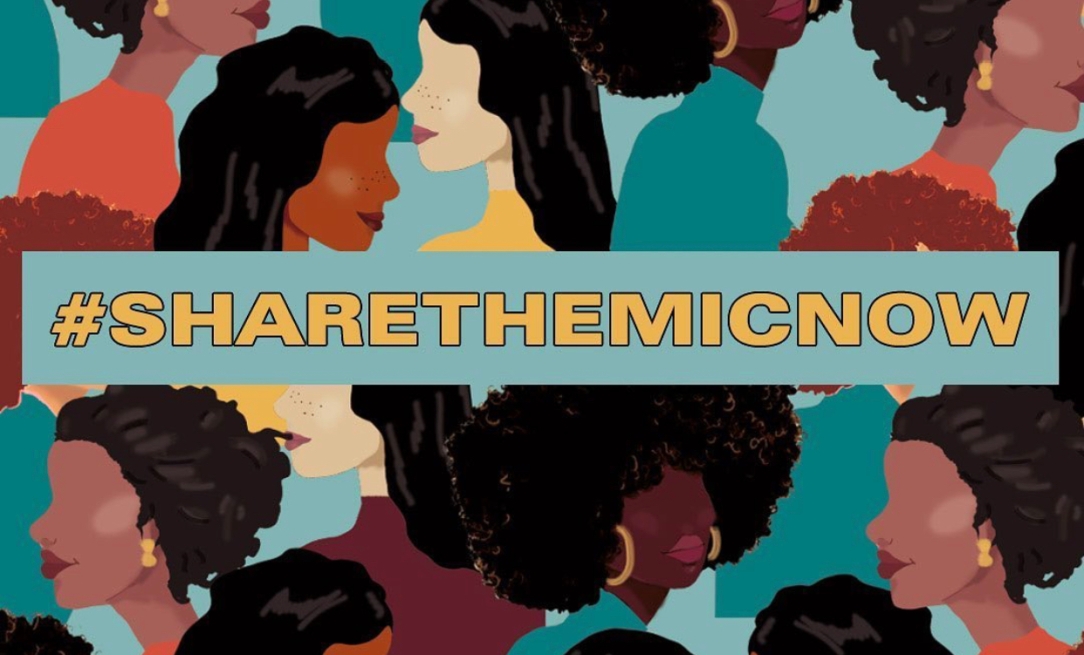 On Wednesday June 10th, I was one of 50 Black women participating in a first-of-its-kind amplification exercise: white women with large platforms turned them over – literally – to Black women for the day to use as we see fit. An opportunity to promote ourselves, our work, our causes, or just have a dialogue – whatever we were moved to do.

I was matched with author and activist Liz Plank (IG @feminstabulous), who educates through entertaining content, as I do. Because almost everything I do starts from the perspective of music, entertainment and culture, I chose to talk about Black media – created by Black people for Black consumption – as an avenue to advance allyship.

We’re all human, yes? Correct. But with very different lived experiences. There’s a lot of discourse about how the world views Black people; it’s also important to understand how we view the world.

Because content that centers white stories is default, we’ve collectively spent significantly more time exposed to your perspective (speaking broadly), than you have ours (again, speaking broadly). Relationship means a mutual understanding of each other. Consider today a starting point in taking time to seek the Black perspective in spaces outside of work and politics.

Americans of color consume stories and content that centers the white experience our entire lives – it’s the default. But when white people are exposed to Black stories, it’s often either still from a white lens (The Help, Greenbook), or created to be digestible and palatable for a “mainstream” (read “white”) audience. In order to champion for Black lives and be in relationship with Black people – which is what allyship is about – it’s important to know how the world sees us, but also important to understand how we see the world. Black content that was created by and for Black people can give you insight into cultural divides you hadn’t even considered. More importantly, give you a fuller picture of the Black lived experience.

I turned my IG stories and IG live on Liz’s page to one complete piece (and added some extra content), and chopped it up into digestible bits by topic. I’ve also added my suggested book, film and TV references and the Black MUISC Stories playlist I crafted as a bit of a leave behind. I plan to add more to this page, so check back periodically!

WHY: Spike’s seminal film about the hottest day of the Summer in BedStuy Brooklyn felt prophetic then – racial tension in NY was high in 1989, the year of the Central Park Jogger / Exonorated 5 case and of Black teenager Yusef Hawkins‘ murder in a Italian-American Brooklyn neighborhood – but it could drop today with very little updates. DTRT explores the relationships Black people have with the business owners in their communities who aren’t of their communities, with gentrifiers, and with the police and police violence. If you’re wondering how anger and frustration builds to the breaking point of looting, rioting and destruction of property, Do the Right Thing might provide some insight.

WHY: Fruitvale is the true story of 22 year old Oscar Grant, who was killed in 2009 by police at the Fruitvale BART Station in Oakland on NYE – Grant hadn’t committed any crime – seen through his point of view during the days and hours leading up to his death. Like so many of the Black names we end up hashtagging and seeking justice for, Oscar was just trying to get home. It is not an easy watch. That’s also the point.

WHY: Welcome to a Black church experience. As much as music writers, historians, and Aretha fans talk about her church background, this is one of the few times you actually see her in a church setting. Shot at the New Temple Missionary Baptist Church in Watts, and featuring both Gospel legend James Cleveland and Aretha’s father, the Rev CL Franklin (one of the most foremost Black preachers of modern history), Amazing Grace is foundational Aretha. And it might give you some context as to why her funeral was so long – and why we weren’t surprised, nor did we care that her funeral was so long.

WHY: Even though Norman Lear is a white creator, he’s largely responsible for modern Black television. He was the first TV producer to center a sitcom around a Black family, the first to ever highlight two married Black parents in the house, and the fist to showcase the Black middle class with The Jeffersons. George and Louise were the first Black family to integrate Archie Bunker’s neighborhood, and then jumped to their Eastside High Rise. The first two seasons of the Jeffersons highlight the stark contrast between the world of the working poor and the rich. It’s also a story about trying to assimilate without losing your roots. Without the Jeffersons, we don’t have the Cosby Show, and by the mid-’80s when the Cosby Show debuted and the Jefferson’s bowed shortly thereafter, the Black middle and upper class had grown enough so that George and Louise weren’t a novel story to tell anymore. But those first few years in the ’70s, they are everything.

The Warmth of Other Suns/ Isabel Wilkerson

(From The Atlantic) – How do you tell the story of six million people? Wilkerson interviewed more than 1,200 people to find three who migrated at different decades to different cities. Ida Mae Gladney and her husband leave Mississippi sharecropping to settle in Chicago after a cousin is almost beaten to death. George Swanson Starling, high-school valedictorian and orange picker, leaves Florida for New York when he hears that his labor organizing has put him in danger of lynching. Robert Joseph Pershing Foster, who trained as a surgeon at a prestigious black college, leaves Louisiana to establish a successful practice in Los Angeles.

(From NPR) – In 1951, an African-American woman named Henrietta Lacks was diagnosed with terminal cervical cancer. She was treated at Johns Hopkins University, where a doctor named George Gey snipped cells from her cervix without telling her. Gey discovered that Lacks’ cells could not only be kept alive, but would also grow indefinitely.

For the past 60 years Lacks’ cells have been cultured and used in experiments ranging from determining the long-term effects of radiation to testing the live polio vaccine. Her cells were commercialized and have generated millions of dollars in profit for the medical researchers who patented her tissue.

Lacks’ family, however, didn’t know the cell cultures existed until more than 20 years after her death.

(From PBS) Though the book is currently hailed as one of the most important in American literature, its initial reception wasn’t completely rosy. Richard Wright, often considered Hurston’s chief literary rival, wrongheadedly criticized her novel for not explicitly addressing the “race problem,” and for allegedly choosing sensuality over social commentary.

I, too, met the novel with a certain amount of skepticism. I first encountered Their Eyes Were Watching God like many young people coming of age in the late-20th century, in an introductory Women’s Studies course. While I can’t recall much of the classroom conversation on the novel, I do remember not being particularly impressed by the book. Unlike Wright, I source my early lack of reverence to my limited understanding of one of the novel’s salient and enduring themes: love, in the context of Black American life. I would eventually come to realize just how radical this meditation on love and self-determination was, and why it was so audacious that Hurston set her heroine’s romantic adventures in the poor, rural South.

(From WBUR) “Invisible Man,” published in 1952, was the first novel written by an African American to win the National Book Award. It is a magisterial work of fiction, combining allusions to great works of literature with keen insight into the complex psychology and painful social reality of being a black man in mid-20th century America. Moreover, it is engaging, mysterious, funny, sad, brainy, and honest. In short, it’s a must-read.

I’m proud to have been a contributor to Zora Mag’s list of the 100 most iconic albums by African American women, a thoughtful and exhaustive work that spans seven decades and multiple genres.

“(The canon) is a celebration. It also functions as amends for the fact that there were not and are not a plethora of media spaces in which Black women in music, in step with their success and influence, are lifted by the American culture machine to genius-level status.

If it weren’t for affinity publications and institutions like Soul Train and BET (which emerged in response to the segregationist mores of mainstream American journalism and broadcasting), we wouldn’t have much detail about the depths of Black genius — by any gender — at all.

I want every Black woman recording artist, songwriter, producer, and music executive — really I want it for every Black woman, period — to receive the confirmation of resilience and brilliance she rightfully deserves. I want canons that explode like real cannons.”

Take a listen as you read! Check out Zora’s Spotify page for playlists created from the Music Canon!

I created the Black MUSIC Stories playlist is a sampling of the Black experience through lyrics and sound. There are the stories woven through the movement and protest music of the ’60s and ’70s plus hip hop of the ’90s and beyond; the celebratory energy of boogie music, disco and dance jams; the pain, longing and hope of gospel. This is not an exhaustive work, but an appetizer. I encourage you to listen almost academically – to lyrics, structure, vocal style – but also to allow yourself to feel the music. And do your own additional research on some of these artists and/or their peers and genres.

Tags: #ShareBlackStories, #ShareTheMicNow, Activism, Allyship, Black Culture, Do the Right Thing, Fruitvale Station, Invisible Man, The Help, The Immortal Life of Henrietta Lacks, The Warmth of Other Suns, Their Eyes Were Watching God